The current focus for CFRISA is to focus on raising financial support from two primary streams: (1) Ukraine Firefighters and (2) Ukraine Medical First Responders. Through an alliance with Firefighter Aid Ukraine, any financial support fundraised through our volunteer group is earmarked according to the First Responder stream (Fire or Medical/Humanitarian Aid). The financial support will be put towards identified needs such as shipping donated equipment, purchasing specialized equipment in Canada and shipping it to Ukraine, or purchasing equipment sourced near or in Ukraine.

CFRISA is working with an alliance partner Firefighter Aid Ukraine, a not-for-profit organization with the mission “to collect unneeded/unwanted firefighter bunker/turnout gear, personal protective equipment (PPE), life rescue equipment, and medical supplies from fire departments and vendors in Canada, as well as to raise the necessary funds to send these goods to first responders in various locations of Ukraine who are in desperate need of equipment and supplies required to fulfill their duties to serve and protect citizens, while ensuring one’s own safety”. Firefighter Aid Ukraine is working with CFRISA to allocate any financial assistance raised through our campaigns to the areas in most need of both fire and medical service First Responders in Ukraine.

CFRISA’s website, https://CANrespondUKR.com, will be the host for information on current fundraising campaigns, as well as information on where the financial support has been provided.

The history of challenge coins began almost 100 years ago by the American Army. During World War I, the story goes that “a rich officer gave his men bronze medallions featuring the insignia of their flying squadron. Not long after that, a young flying ace (airman) was shot down and captured. Germans are said to have removed everything from the ace’s person except for a pouch he was wearing — one that held his medallion. After he escaped to France, he was sentenced to die, as the French labelled him a spy. However, the ace presented his medallion as proof of his identity. Because one of the French soldiers recognized the insignia, France delayed the ace’s execution. After his identity was confirmed, the ace was returned to his flying unit.”

The “challenge” of the coins began during World War II when Americans in Germany started to do coin checks and if it was known that you had been presented one, but did not have it on your person, you had to buy a round of drinks. This tradition still exists today.

Challenge coins are now used throughout all First Responder agencies, as well as other organizations, to show signs of respect, leadership and jobs well done. They are very meaningful for those giving them and for those receiving them.

The traditional way of giving a Challenge Coin to a recipient is through a handshake. 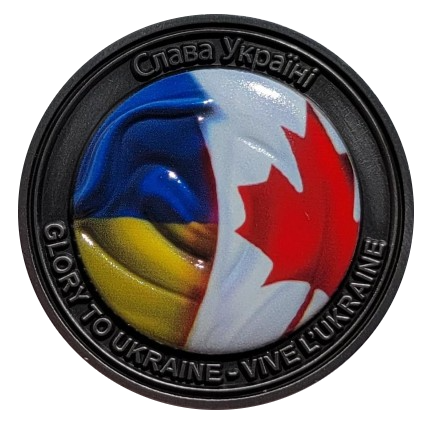 Back of Coin – Fire and Paramedic 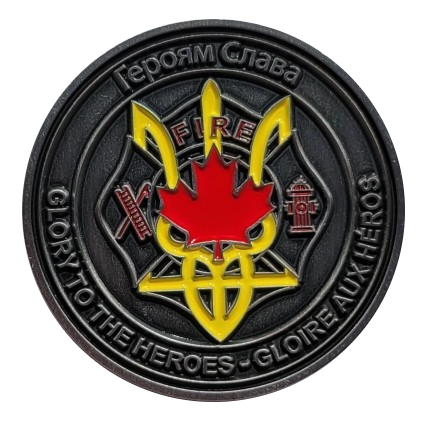 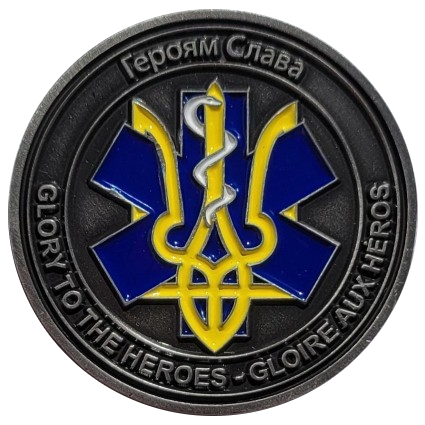 Produced with the Generous Support from:

How To Purchase A Coin And Show Your Support

Use the link below to take you directly to the Canops Store website coins for purchasing. Every one-of-a-kind, custom-made, coin purchased helps support Ukraine’s first responders during this very difficult time.